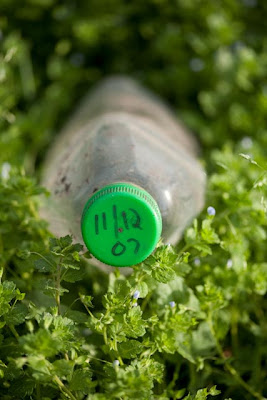 When Al Gore made "Green" the word of the day, I was worried that the fad that was sure to follow would actually weaken the real movement. But I thought it would at least bring it onto more peoples radar. I believe I was right on both accounts. With the complete and thorough lack of ethics in advertising, corporate America didn't disappoint and stuck a "Green" label on everything they possibly could. Being the skeptic that I am, I question quite a few things.
Spring has sprung here in SE North Carolina and I have been out getting some dirt under my fingernails. While digging in a flower bed I found this plastic bottle made from corn that I buried back in 2007. Now I'm sure that making a plastic bottle out of corn is more than likely better than making it out of petroleum, but this bottle obviously did not return completely to the earth in 60 days as advertised. I remember leaving the bottle out in the sun for a month or two then I partially buried it, where it has remained until now. Is it actually made from corn? Was any testing done?
I don't really have a point. I just thought a bottle buried for a couple of years deserved to have it's story heard.
Posted by Steve Brimm at 7:55 PM 4 comments:

If your into birds or Copper Harbor or Brockway mountain or all three you should make it a point to get there for the birding festival. If you've never seen two thousand Hawks, Eagles, Osprey and Accipiters in one day, not to mention loons and every passerine in the book, then you need to go. Besides, there will be music, food and a bonfire in the Community park. It's a jolly good time. So polish up whatever $1100 or $30 pair of field glasses you own and head on out. Oh, I almost forgot about you Photogs. Eye level shots! Merlins bouncing on the thermals right in front of you. You can't miss!
May 15th & 16th
Go to the website for more details.
or call Karen @ 906.289.4588
Posted by Steve Brimm at 3:43 PM No comments: